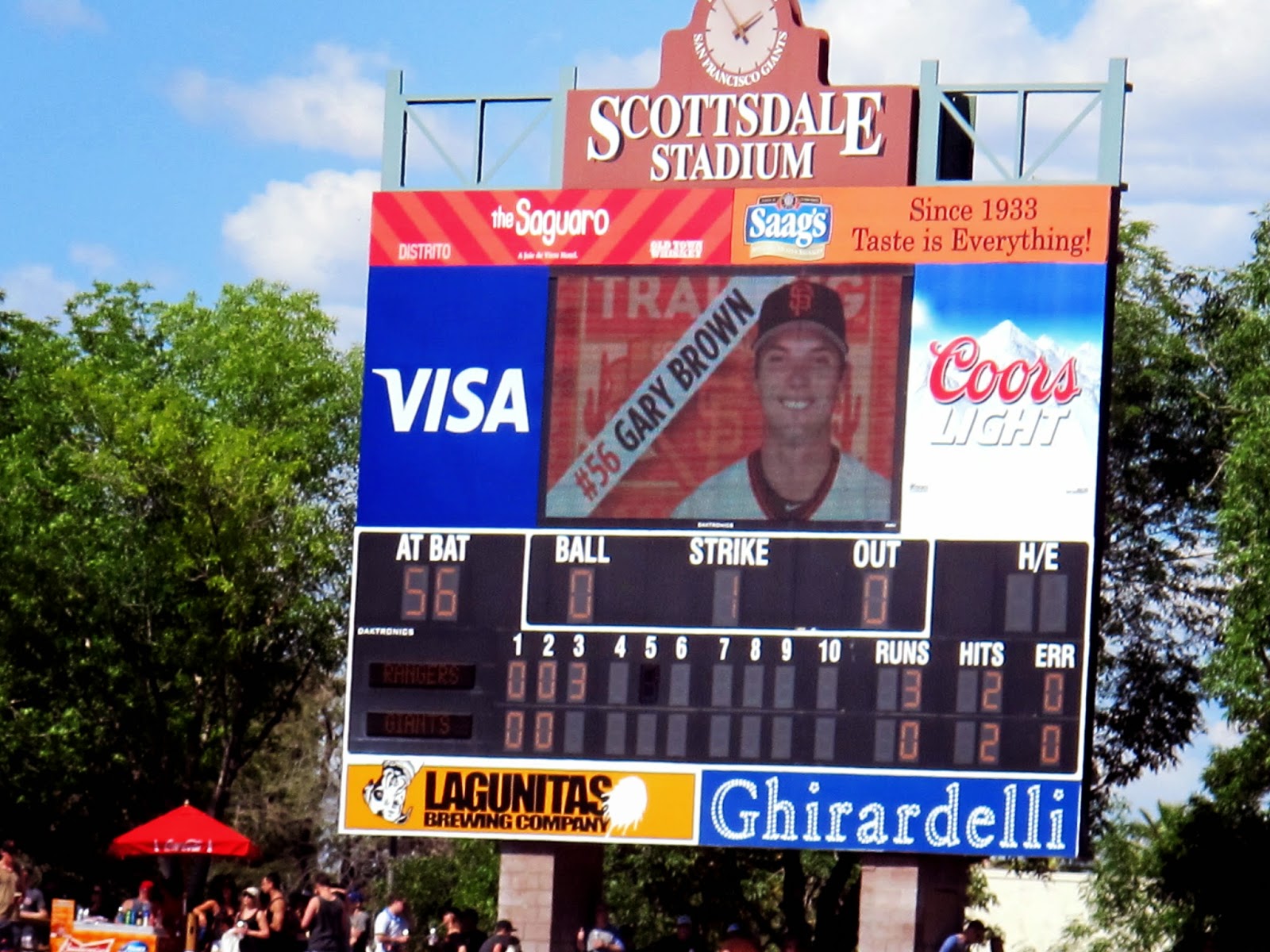 What started out to be a frustrating experience ended up being the showcase for the Cactus League’s finest. I typically never get tickets in advance, usually, if you need just one ticket you can scarf one easily. This day was a tad different. In case you were on Mars last year, the Giants won the World Series; and everyone loves a winner. The ballpark was packed and there was really no where to park unless you wanted to pay someone $20 to park in their yard. If you read my blog you know my trips are done on a shoestring budget, so I was able to snag a parking spot for free and get my daily exercise in by parking about ¾ a mile away and hoofing it to the ballpark.


Then where was the ticket issue. No seat available, which was not problem since I was aiming for the less expensive lawn. There were “standing room only” tickets available for $40. Forty bucks? I explained that I only wanted to watch the game, not play in it. That didn’t help. I really didn’t want to miss the last of the ballparks and leave my research incomplete but there was no way in hell I was paying the monthly salary of a sweatshop worker to see what amounts to a scrimmage game. It looked like 9 of 10 ballparks would have to do.


I had been in contact with the ballpark’s General Manager of all things concession and gave him a call to let him know I would not be able to make it in and interview him and his chef. Eric Babcock was having none of that. He met me at Gate E and escorted me in for a face to face with his chef. Now there is a man that appreciates science. He introduced me to Larry “Love” Manuelito. Larry is a man that appreciates art; food art. He offered up one of his masterpieces for me to try: his version of a Sonoran dog. If you read my blog you know the Sonoran is my favorite regional dog and no life is complete until you eat one. Larry adds his own twist by putting a pineapple pico de gallo on it, and it takes the Sonoran to an entirely different level of deliciousness.


Larry got his nickname of “Larry Love” through the fact that his secret ingredient is the love he puts into each of his dishes and creations. A Navajo, Larry spent some time on nation land where he learned to harvest his own sheep and benefit from the experience of helping in his grandmother’s kitchen. Parlaying that background and using only fresh ingredients Larry has been the personal chef of several world renown athletes and added delicious delights to numerous sports venues. His Sonoran belongs in the hot dog hall of fame.


Eric was kind of enough to give me the ballpark tour. It was obvious why he was so helpful getting me in the park. He has a operation to be proud of and anyone that works so hard to get it so right is usually eager to show it off. And they get it very right in Scottdale. The regular dog was also one of the best and the remaining selection of food looked out of this world. Scottsdale Stadium is one of those few ballparks you should come very hungry to. And it shows in their score. 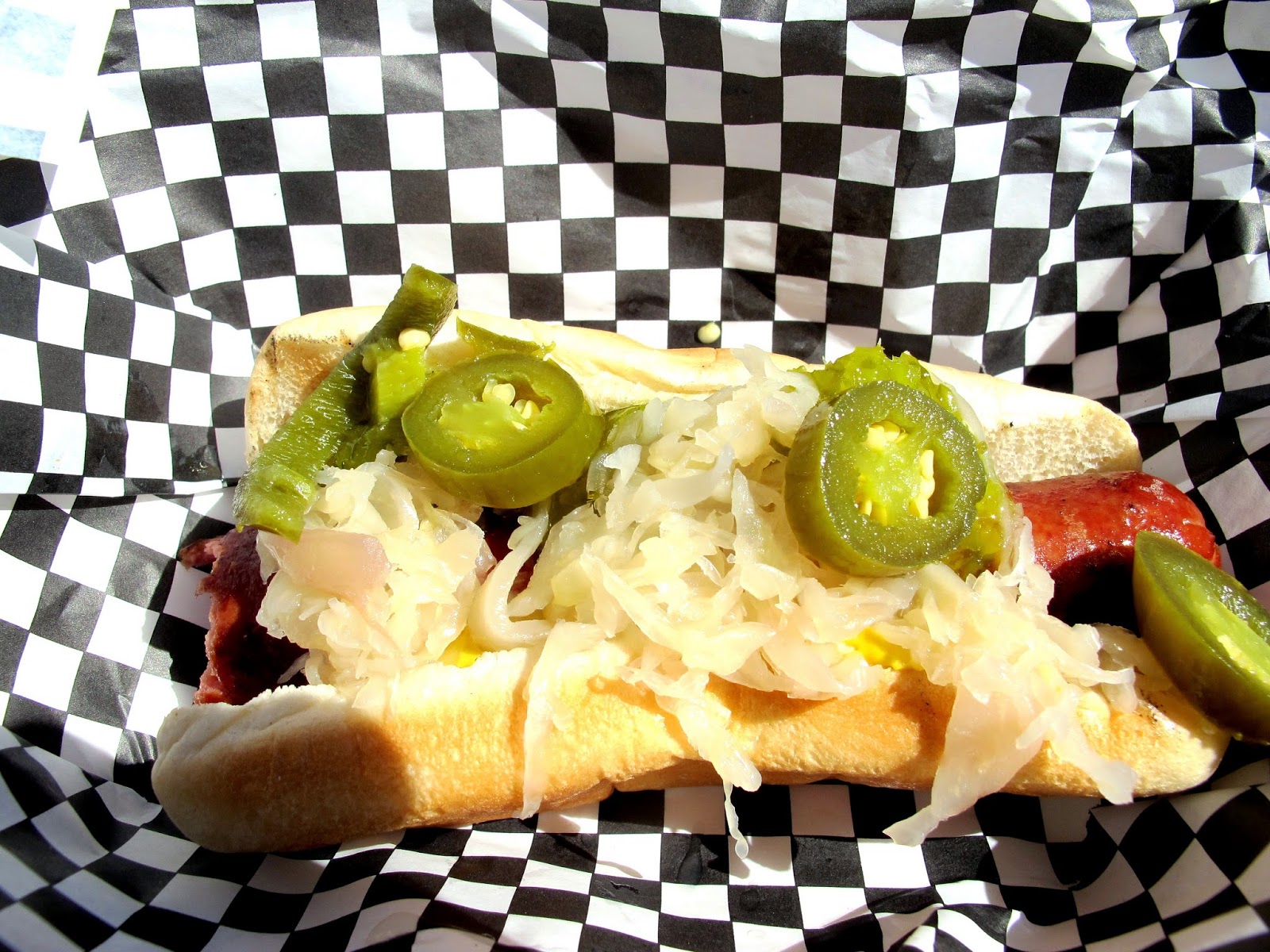 Bun-fresh-5
Taste-a plump and juicy Ballpark frank-5
Toppings-a better selection than the majority of Cactus League venues-5
Price-slightly pricier than some other parks-4.5
Portability-placed on top of a paper wrapper inside of a cardboard boat-5
It Factor-the pineapple pico de gallo Sonoran is enough for top score, but there are others as well-5


BALLPARK
Location-the only pure downtown ballpark in the league-5
Access-walk, bus, pedicab, they have it all-5
Cleanliness-spotless-5
GA Ticket Price-I wrote today off as an outlier and checked on other dates. Most ballparks are between $7-12 but the cheapest in Scottsdale was $20. YIKES!-2
Ambiance-feels like a real baseball park-5
Fans-most fans at any game and the ones that could see the field were actually watching the game-5

By coincidence, I was saving the best for last. Scottsdale ends up on top by edging out Sloan Park with a score of 56.5 out of 60. The ticket prices are really the only thing that drug down the score significantly.

That puts Scottsdale Stadium on top of the list of Cactus League venues to visit. If you are just coincidentally in Phoenix during spring training with time for one game, this is the ballpark to hit. Plus, Scottsdale is a fun place to visit before or after the game and walkable from the ballpark. And while there, grab one of Chef Larry’s over-the-top creations, it will make your visit even more memorable.
Posted by Moondog at 9:38 AM

This blog serves to chronicle the host's travels to ballparks in search of the best hot dog a fan can experience. It is a mixture of baseball, Americana and the food that binds the two together...the hot dog. Your comments are most welcome. PLAY BALL!